“I’m going to ask for complete bloodwork so we can rule out other conditions,” my psychiatrist said.

“Okay, Doc. Can we do it now?” I responded, surprising myself.

I have spent my entire life terrified of needles. As a child, my regular vaccinations always resulted in soap opera-worthy theatrics. I was weeks away from turning thirty when I shamelessly threw toddler-level tantrums in the emergency room after finding out that I had to be hooked up to an IV. And during that dance with dengue, which involved two blood tests a day, after the 6 p.m. blood draw, I would stay up all night in fearful anticipation of the 6 a.m. one. At each blood draw, I would dramatically cover my head with a bunched-up hoodie, refusing to see my own blood. Sometimes, tears were shed. Powie found the whole thing so hilarious that he documented it on video.

And now, all of a sudden, I was offering myself up for total bloodwork willingly and nonchalantly? Fuck, I thought. Something really is wrong with me.

Dr. D looked up at me and asked, “When was the last time you ate?”

“You overfasted, that would make the results inaccurate.”

A few days later, I returned to the hospital, this time to the lab. “Blood test please,” I said, as if I were ordering fries at McDonald’s.

“What time did you start fasting?”

“Umm, 2 a.m.?” I said, not bothering to mention that what I had in the middle of the night wasn’t a full meal but just a couple of forced bites.

“That was 13 hours ago. You overfasted,” I was told again. I sighed.

Yes, the girl who used to love eating was rejected twice by the blood test gods for fasting too much.

A couple of days later, I was back and I had made sure that I had eaten just ten hours prior. The nurse typed my information into a computer and when I told him my birthday, he exclaimed. “Ay ma’am, magka-birthday tayo!” We smiled at each other.

And when it was time for my blood to be drawn, I asked the nurse, devoid of any feeling, “Right arm or left arm?”

“Right,” I was told. And I offered it to her, feeling absolutely nothing, no fear, no nervousness. You want my blood? Fine, take it, whatever. I even watched as she transferred the blood into vials, marveling at the thought that the crimson liquid had come from my body.

I thanked her and got up. I had more feelings about how much the blood test cost than the actual pricking.

Seriously, how can one damn blood test cost almost P9,000? I couldn’t believe my eyes when I saw the bill. “Tangina ang mahal maulol,” I texted my friends.

But because I remain an optimist no matter what my mind says, I found a silver lining in the sudden disappearance of my needle phobia:

HOLY SHIT, I CAN NOW GET A TATTOO!

And I knew exactly what I wanted. Just a small black “2.0” on my wrist.

For weeks, people kept telling me that I was going to be fine, that if I took my medication, I would be back to normal. But I didn’t think that was going to happen. I had changed so much in a matter of days and I was sure those changes had left indelible marks on me. And the truth was, I wasn’t even sure I wanted to go back to who I was.

A friend who has been depressed said, “One of the biggest things you have to accept is that you may never go back to being the person you were. And that’s okay.”

It was such a relief to hear that and to have it echoed by people crucial to my healing including my psychiatrist. “Anak, think of it as a new chapter,” she said to me.

“It has changed you,” Nico said. “And maybe you can’t change back into Pam-Before-Depression. But you CAN become Better Pam. Pam 2.0.”

2.0. I wanted my tattoo to celebrate the new and hopefully better version of me.

I kept bugging Tatin, a veteran with four tattoos, about my desire to get inked. “Taaaaaats I want a tattoo,” I would text her at random hours.

She booked an appointment for us with illustrator and tattoo artist Wiji Lacsamana.

Naturally, I began stalking Wiji on Instagram. And when I saw the incredible colored tattoos she creates, I realized I was in trouble. “Uh oh,” I told Tatin. “I have a feeling I will end up getting two tattoos.”

Days later, Tatin and I arrived at Wiji’s tattoo studio. 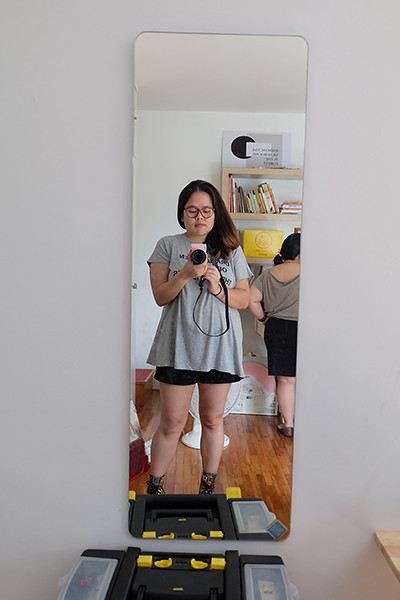 I loved how clean, cozy and comforting it was. Not scary at all. She even has a wall you can stare at to relax you while you get inked. 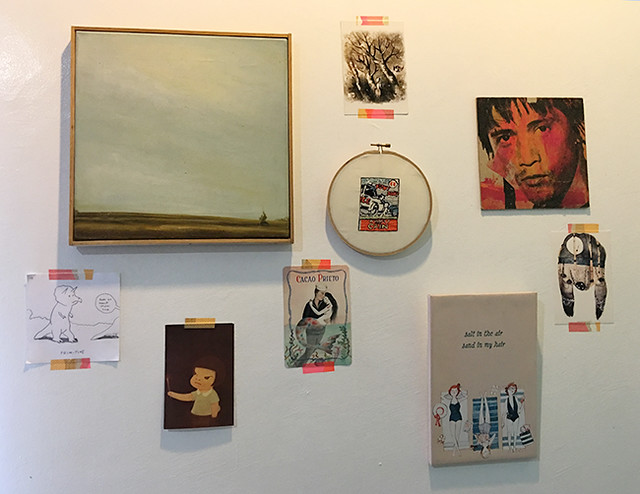 Tatin was getting a tattoo of her beloved poodle Tank’s face and she and Wiji tried to figure out how big it should be. 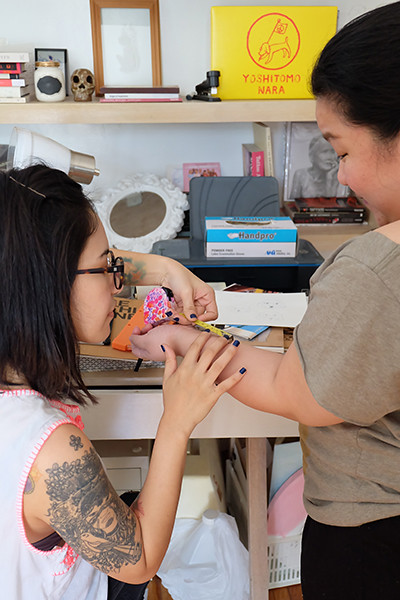 I love how Wiji uses printouts so you can choose the size of your tattoo. 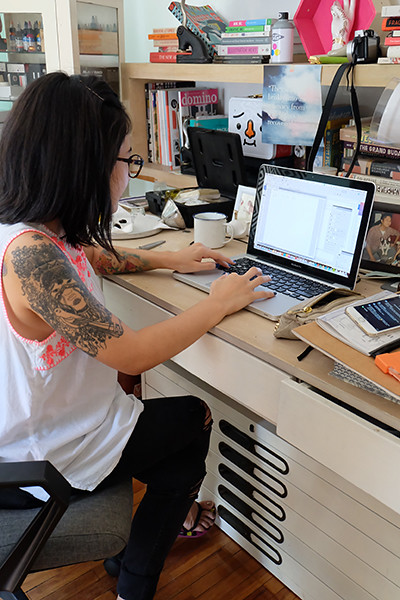 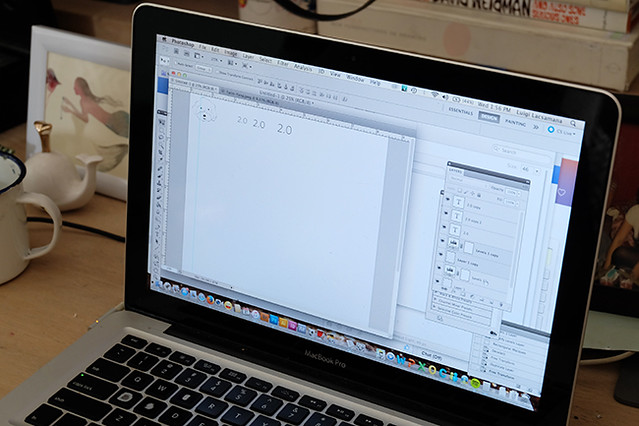 “I know,” I said, while staring at stencils of beautiful tattoos Wiji has done. “I think I’m going to get a second one.” 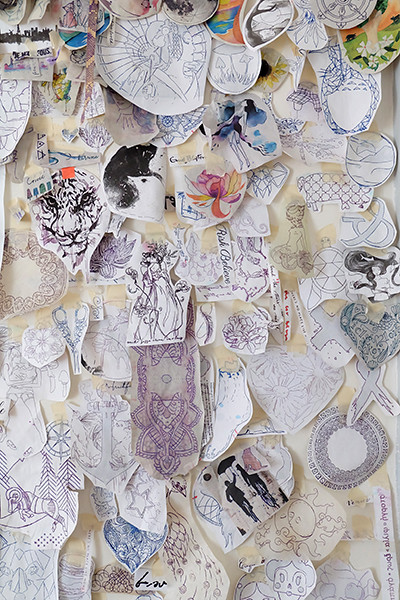 “Go first,” Tatin said as Wiji prepared her tools. I was a mix of courage and nerves. 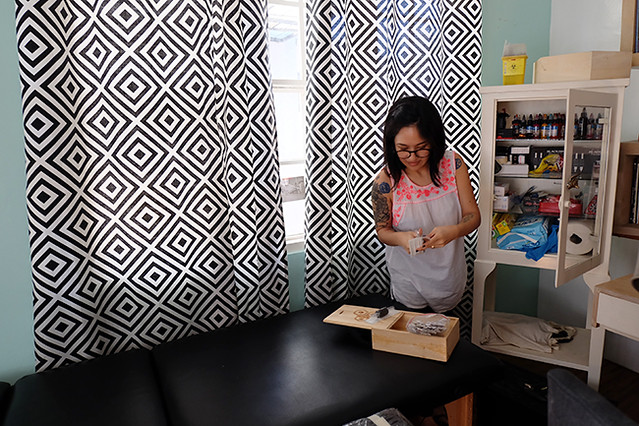 “I’m going to start by shaving the area,” Wiji said. 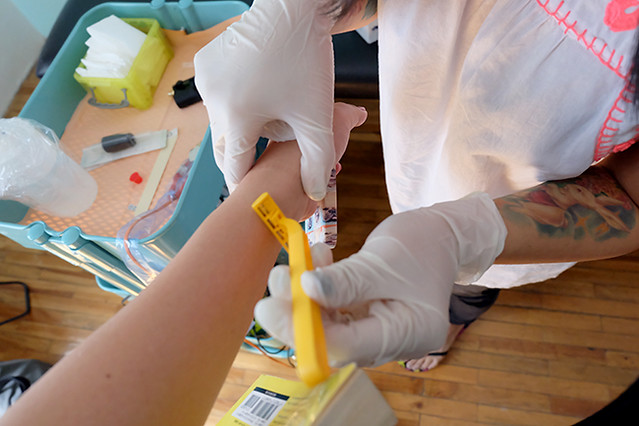 Then she applied stencil gunk. (I forgot what it’s really called.) 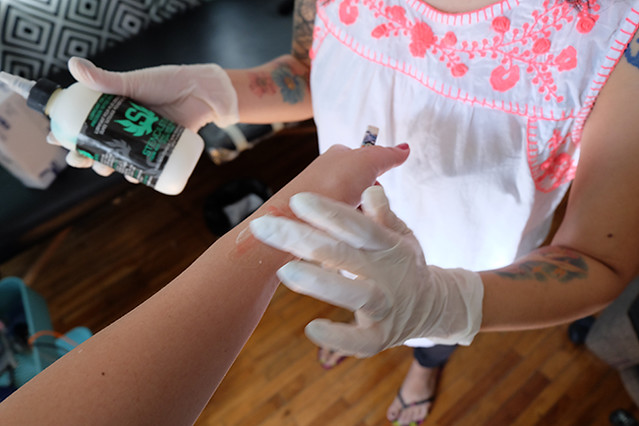 And she used a pink Sharpie as we tried to decide on the exact placement of the tattoo. 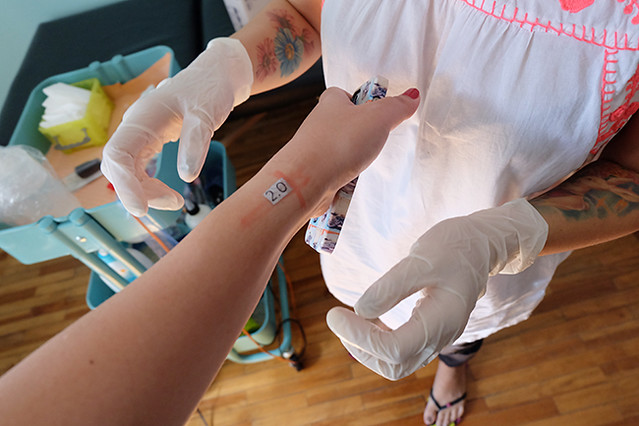 Then it was time for the needle. “You need to stay really still,” Wiji said. Apparently it’s a must when you are getting letters or numbers tattooed.

“You’re not going to have time to read,” Wiji said, laughing. “This is going to be really fast.”

But because I’m stubborn, I grabbed Augusten Burroughs’ Possible Side Effects anyway. Then I popped in my earphones, opened Spotify and started playing M.I.A.’s Bad Girls which has officially become my tattoo jam. 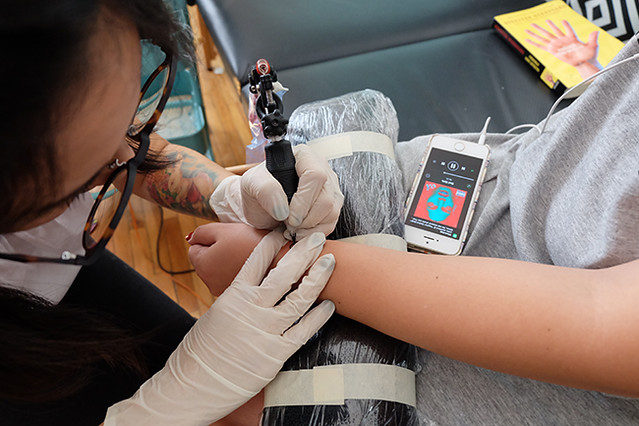 I loved how quiet Wiji’s tattoo machine was, it was practically purring. I felt no pain, just a little pressure.

Then she started on the numbers. And I felt a little pain but it wasn’t bad at all.

“Kaya, kaya,” I kept saying and they started laughing because they said it sounded like I was trying to convince myself. 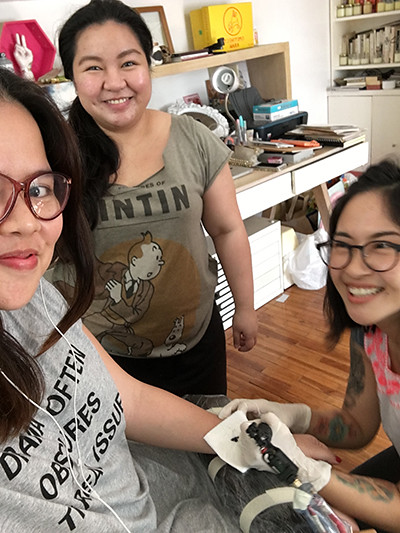 Wiji was right. The tattoo was done so fast that I didn’t even get to finish my song. 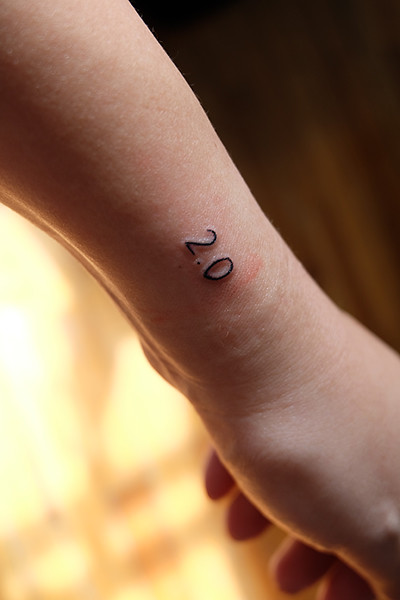 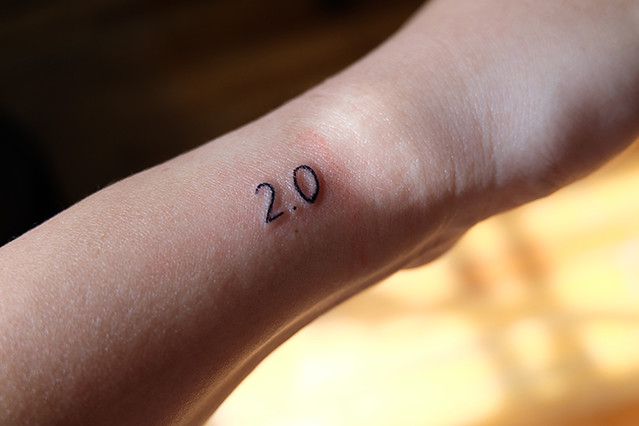 And they were right, I wanted another one.

So while Tatin got Tank’s face tattooed on her wrist, I thought of possible designs. 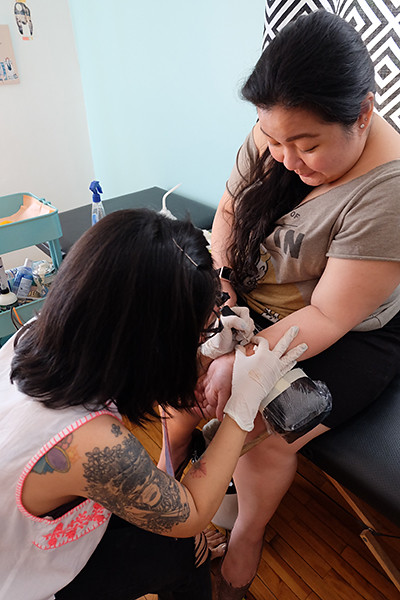 I knew I wanted something that symbolized my love for words, writing and reading. A book? A notebook? And then it hit me: a typewriter! 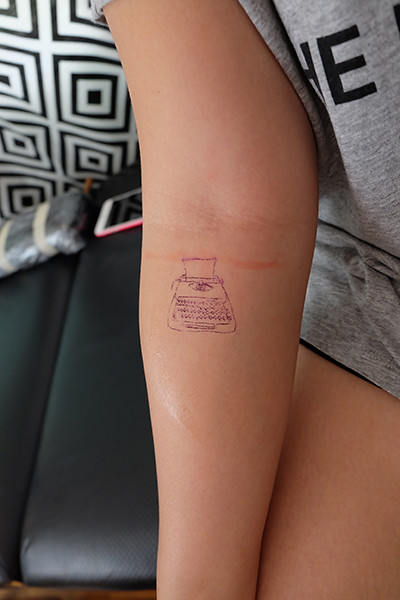 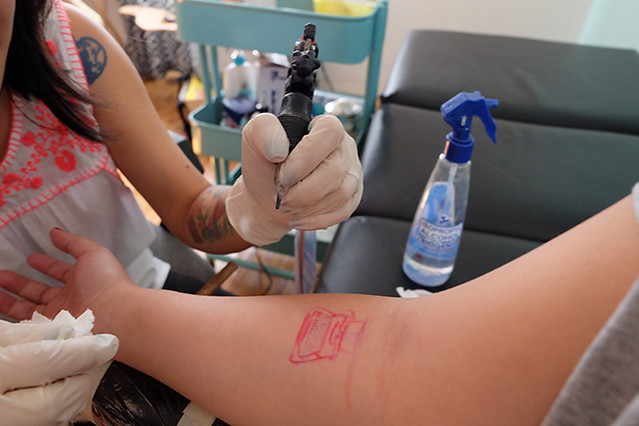 This time, I was able to finish the song. Multiple times, actually. I could have even chosen to read if I wanted to. But I did not. The typewriter tattoo was bigger and more detailed than 2.0 and so it hurt more. But again, kaya, kaya. 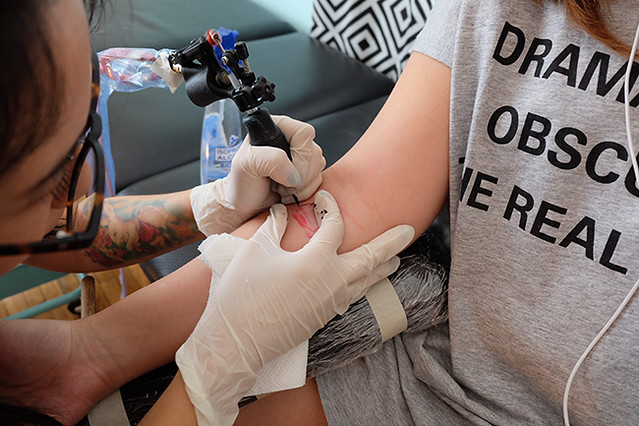 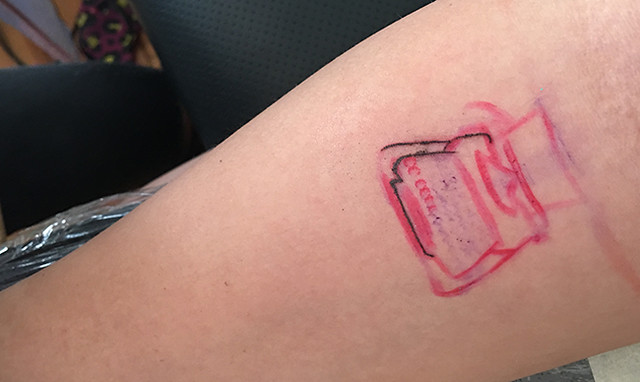 Strangely, getting those tiny little keys done was my favorite part. At some point, you get used to the pain and hardly feel it. 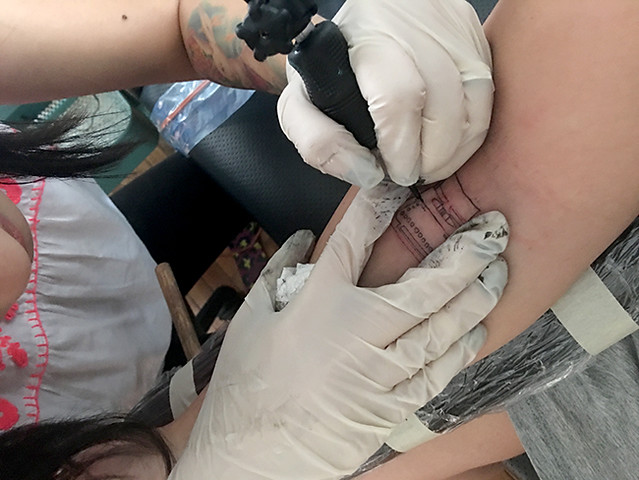 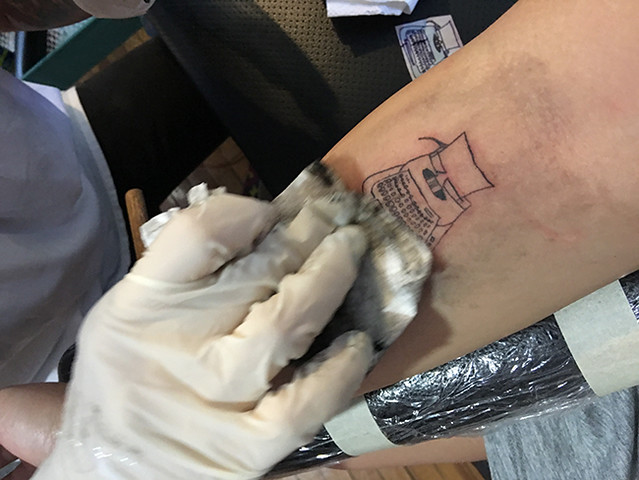 The most painful part for me was when Wiji started coloring the tattoo. But I think it’s totally worth it. 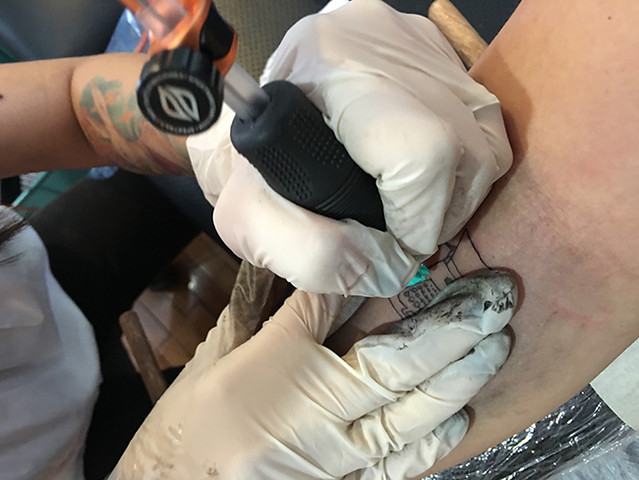 And what shoes did I wear when I got my first tattoos? My tattoo Doc Martens, of course. 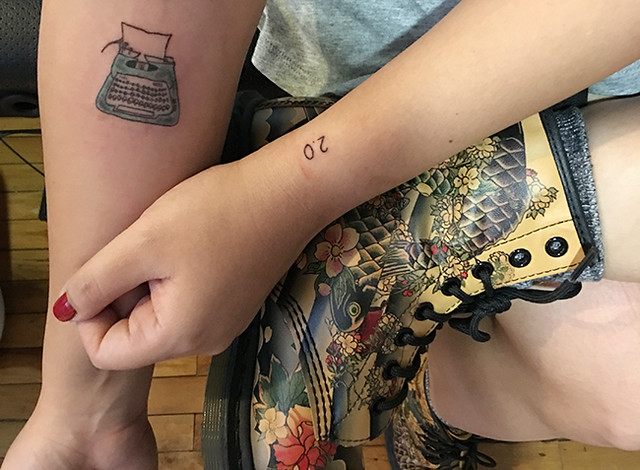 I woke up the next day still absolutely in love with my tattoos. 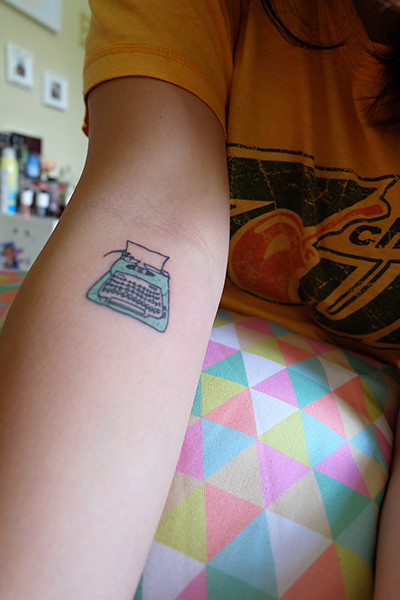 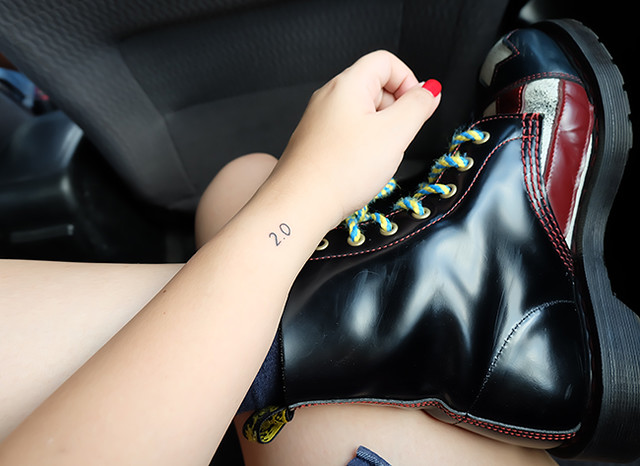 And a typewriter on my right. 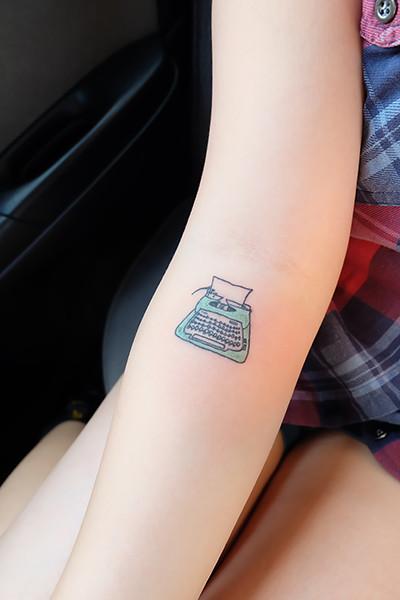 I also got a tin of Good Lovin’, which Wiji makes for her brand Radioactive Mushrooms In The Forest. I’ve been using it to care for my tattoos while they are healing. 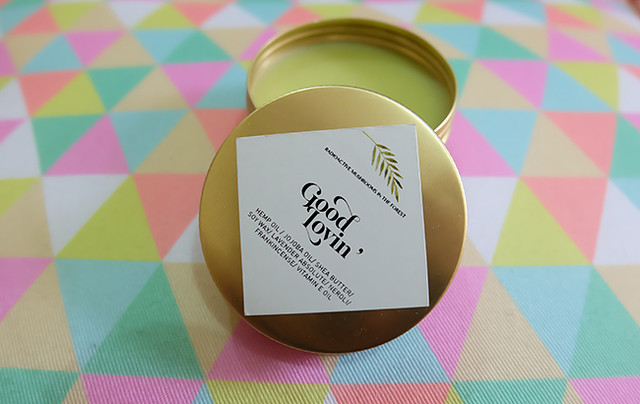 “Welcome to the dark side,” Wiji joked when I expressed joy about finally getting inked. And like I told her, the dark side is a magical place full of possibilities. In fact, I’m already planning my next ones.