I’ve long been a fan of @fidjit not just because of her art and tattoos but also the work she’s been doing to help people struggling with their mental health.

Fidjit’s no stranger to the struggle too. “A lot of my work is based around mental health problems because that’s really quite a big part of my life,” she told Folks in an interview.

Her drowning girl tattoo—a depiction of Virginia Woolf’s death from a flash sheet inspired by the suicides of female authors—has resonated with so many of her clients and now, those who bear the design have become part of the Drowning Girl Club (and no, it’s not just for girls).

I’ve been wanting to join the club and almost did last year but I was, yes, drowning while I was in London. The fog had descended, my dog was back home sick, the miserable weather didn’t help and I spent a lot of time under the covers in a dark hotel room, leaving only when I absolutely had to.

This year, I returned to a sunnier London much happier. And I was lucky to be there on a week Fidjit was doing another flash day. She was tattooing drowning girls all day at Dharma Tattoo London and all proceeds were going to Rape Crisis Scotland to support another cause Fidjit feels strongly about.

Naturally, I went and I’m so glad I did.

That day, Fidjit tattooed 64 people for nine hours straight without stopping for food or drink. And she raised £3335. I’m honored to have been a small part of it.

Round Two Done. Thank you so, so much to everyone who came to Dharma today to get Drowning Girls to support the @missmjustice End Not Proven campaign and to raise money for @rapecrisisscotland . Today I tattooed 64 Drowning Girls and you all raised £3335! I’m always so continually overwhelmed by your trust and support, thanks for making this happen. ☁️ @conor_tattoo thank you for being an absolute life saver and setting up ten billion stations 🖤☁️ I’m off to ice my hands and eat some chips. ☁️ #drowninggirlclub #drowninggirlseries #endnotproven #missm #rapecrisisscotland

Fidjit‘s Drowning Girl Club has over 2400 members now. And I’m one of them.

People get the drowning girl for different reasons. As a reminder. A declaration. For healing. For closure. To celebrate. To belong. To reclaim their bodies.

My drowning girl is a promise. To keep my head above the water. To not be engulfed. To never surrender. Even when the rocks in my pockets want to pull me under.

The last time I saw El, he touched my Wimpy Kid tattoo with his finger and said, “Another new tattoo and still no Shrinking Ninja?”

El had created the character for me when I was diagnosed with depression. He has supported me through this journey, going with me for runs, spotting me at the gym, cooking for me (soup week will always be a precious memory) and being a constant presence even during times I would disappear into my shell. We didn’t know then that it was a battle he too would face just over a year later.

It had always been my plan to get one of my ninja selves tattooed, I just hadn’t gotten around to it. I thought there was plenty of time. But six days after he reminded me of my missing tattoo, El died in his sleep. He was just 28.

I gave his eulogy days later, ending it by apologizing to my grandparents and my mother (they’re not a fan of my tattoos) and telling everyone at the wake that I am finally getting my ninja tattoo.

I did it weeks later, on the eve of my birthday. I braved the rain and the Friday night traffic to make it to 55 Tinta.

Over the past weeks spent missing El and mourning, the Shrinking Ninja’s meaning has changed for me. She is no longer just a girl fighting depression, she’s a symbol of my cousin’s extraordinary ability to keep putting himself before others (something we’ve heard again and again and again from everyone who’s been around him) and the lasting magic of his big, big heart.

Thanks to @alvinscene, my Shrinking Ninja is now permanently a part of me. I love how he added his touch—those pretty splashes of color—and how the tattoo became a collaboration between him and El. 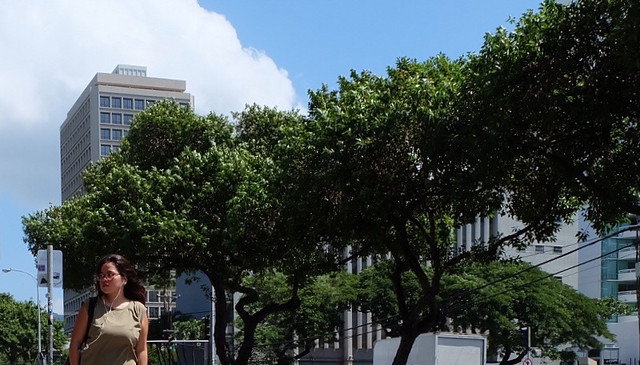 I was on the tail end of what had turned out to be an incredible trip to Hawaii. I had spent days hanging out at different beaches, exploring Honolulu, eating amazing food, meeting really interesting people and revelling in the joys of being a solo traveler. 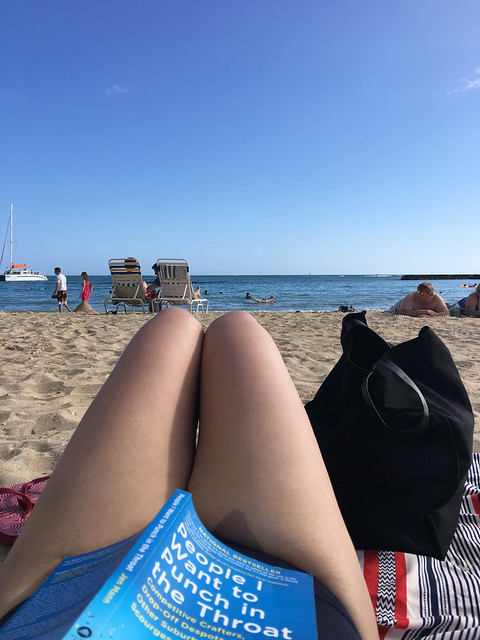 “You’re so brave,” many locals had told me, when they found out I was there on my own. What they didn’t know was that it was also my first solo trip after my diagnosis. It didn’t feel brave, it felt absolutely natural, freeing.  Most days I woke up with no plans and I ended up just following my gut, my heart, my feet (and okay, Google Maps), as it led me to adventures strange, delicious and wonderful. 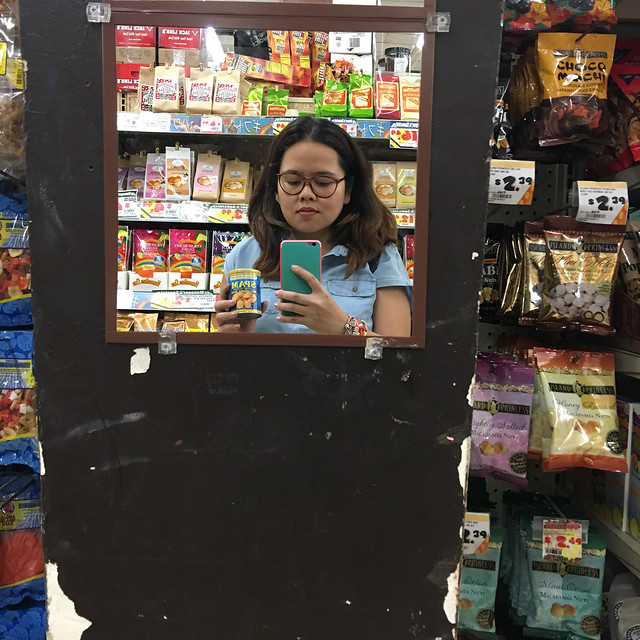 It was my first time in Hawaii, a place that had almost instantly felt like home, something I had never experienced before. There are cities I absolutely love—like New York and London—but despite that love, I never felt a desire to move to those places. Hawaii was different. There was instant attachment. I didn’t want to leave. I wanted to live there. (I still do. And I will. I know I will.) 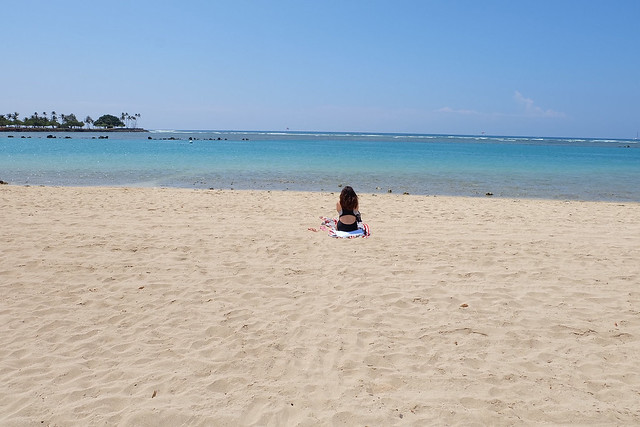 I was sad that my trip was coming to an end and I wanted something to remember it by. A tattoo! It had been around a month since I had gotten my first ones and I had been itching to get a new one.

I Googled “best tattoo shop honolulu,” read a lot of Yelp reviews and decided on Tattoo Hawaii, a shop a lot of people were recommending. The bigger question was if they could squeeze me in. Most tattoo places in the US require a consultation and deposit before you can actually book your tattoo appointment. I called while waiting for the bus that would take me back to my Airbnb.

Me: “Hi, I was wondering if you accept walk-ins?”

Tattoo Hawaii guy: “You have to have an appointment.”

Me: “Even if it’s a really small tattoo?”

Tattoo Hawaii guy: “What did you want to get?”

Me: “A tattoo of a paper clip, the size of an actual paper clip.”

Tattoo Hawaii guy: “Come in tomorrow at 1 and let’s see.”

That was good enough for me.

The next day, after having yet another crazy beach moment and basking (and baking) in the sun, I walked from Ala Moana Beach Park to Tattoo Hawaii. 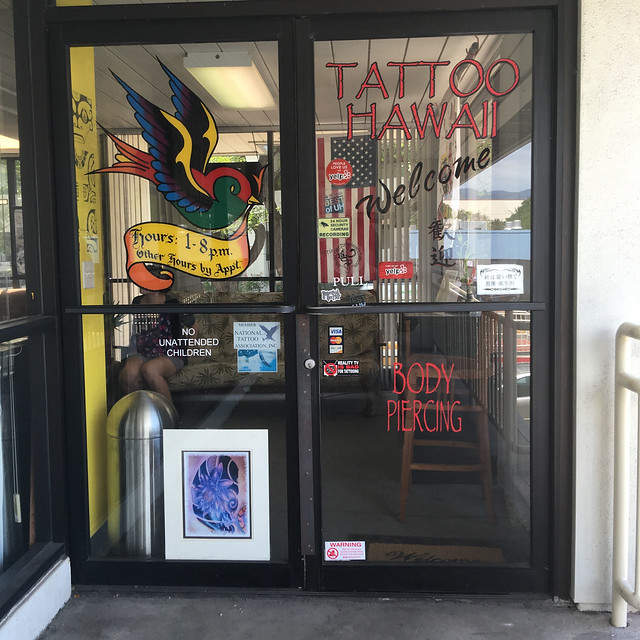 I walked in and saw Dave and, I must admit, I was intimidated when he asked if I had an appointment. When I told him that I had called the night before, he told me to talk to Peggy. I loved her instantly. She was so warm and funny. 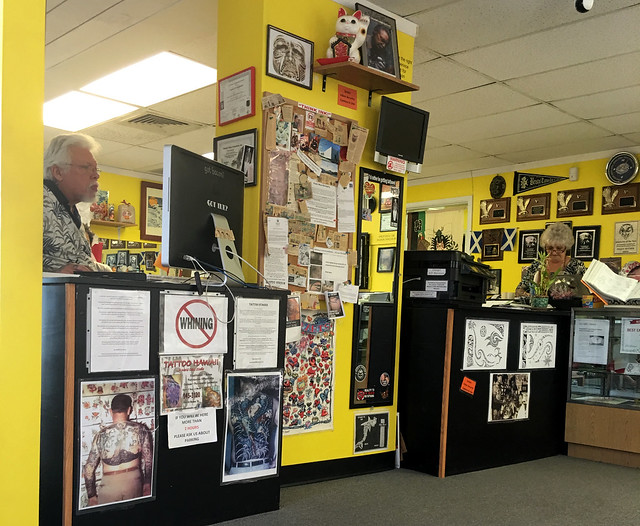 We started by looking at pictures of paper clips online and she explained why some wouldn’t work—the lines were so close together that they would bleed. 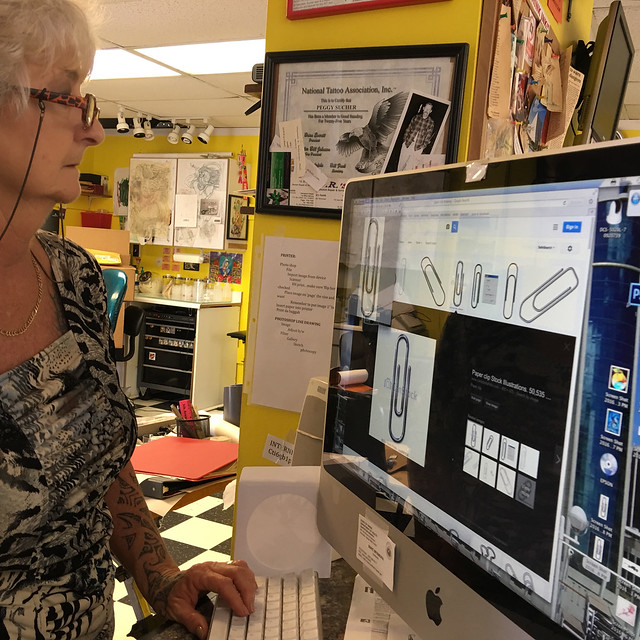 We finally settled on one that we liked but then I saw Peggy at the back of their office. 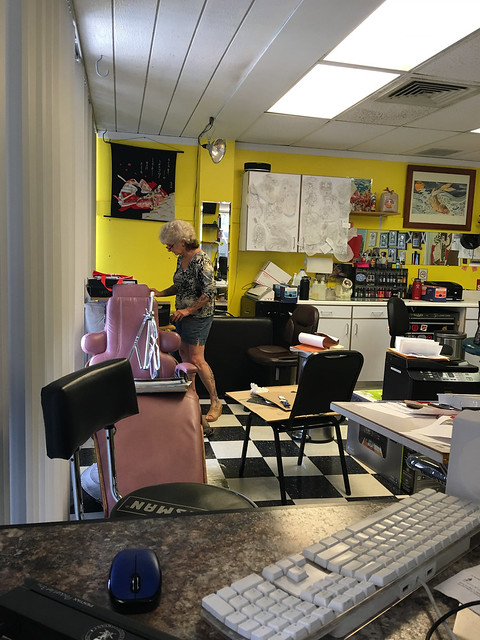 She had found an actual paper clip and had scanned it to create my tattoo stencil. It was so awesome of her to go the extra mile. (And I love the idea that somewhere in Hawaii is the paper clip that my tattoo was based on. It’s a little connection to a place I so deeply love.)

Soon, it was time for paperwork. 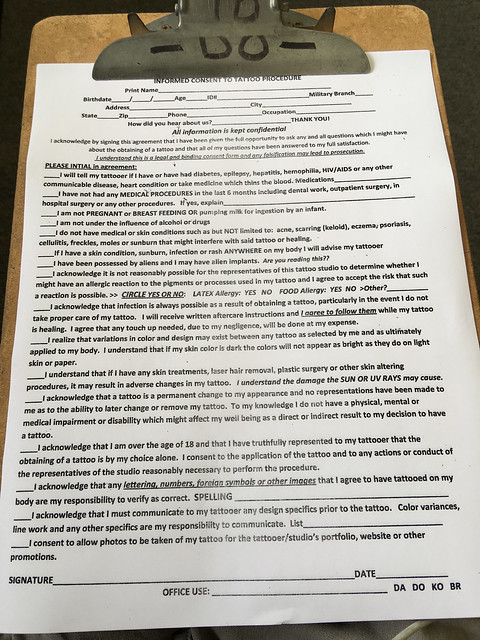 The part about aliens made me laugh.

I handed the paper to Tattoo Hawaii’s desk concierge Sean who then asked to see my ID. Holy shit! I had left my passport at the Airbnb.

I was in for a bit of a wait and I spent time looking around and talking to a girl who was there for a consultation for her first tattoo. 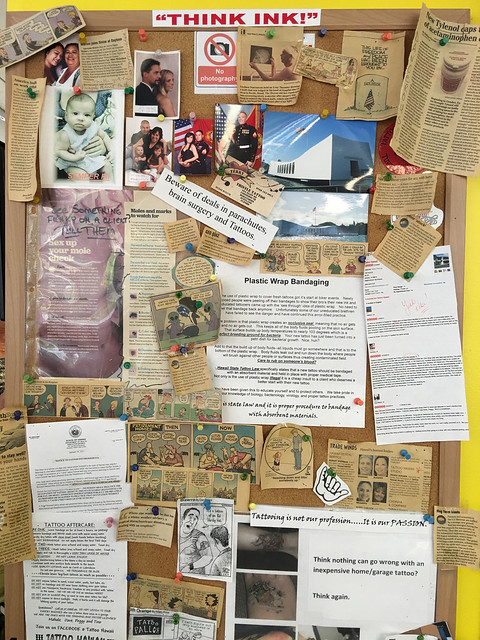 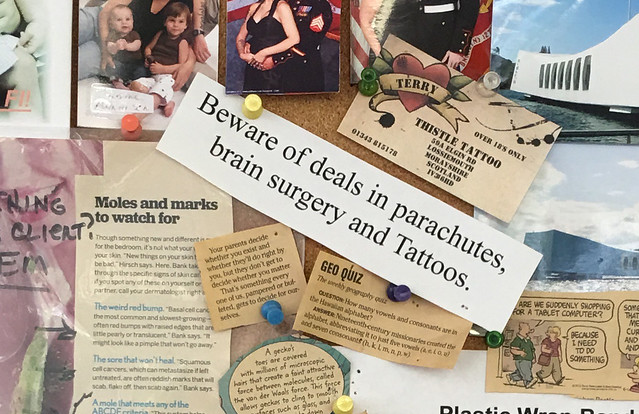 Then it was my turn. “Good luck,” Sean said. Luck was not needed. I spent the entire time chatting with Dave while he tattooed me. 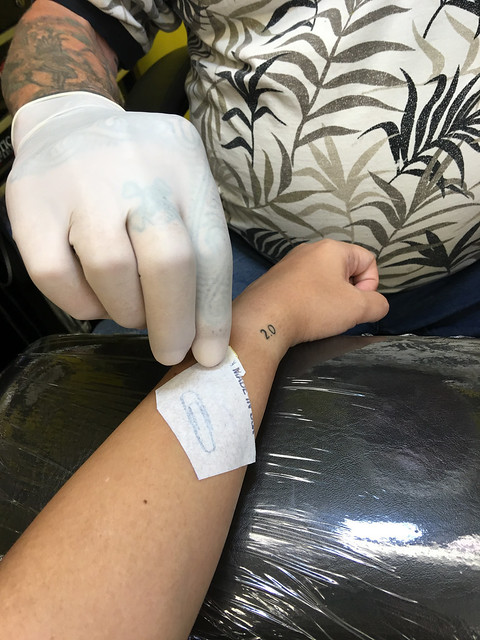 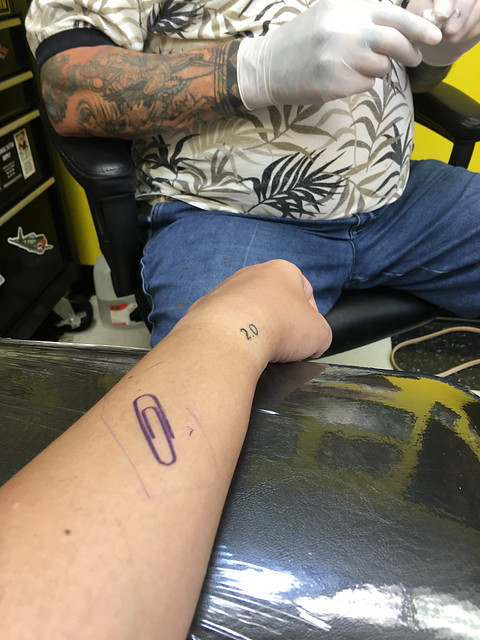 We had such a fascinating conversation about the history of tattoos, Sailor Jerry, tattoo conventions and crazy cover-up stories that I barely felt the needle. 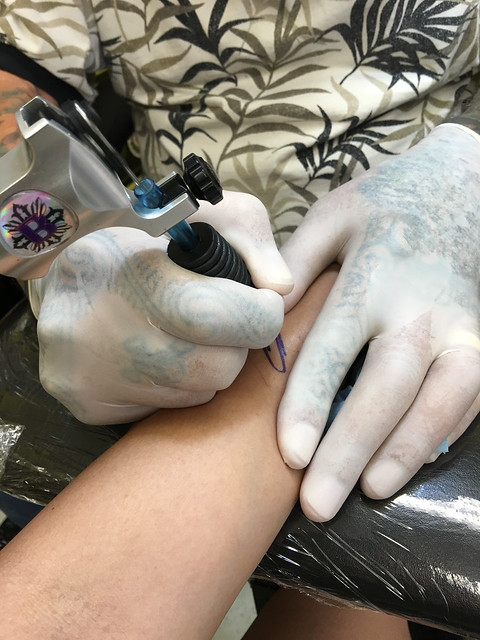 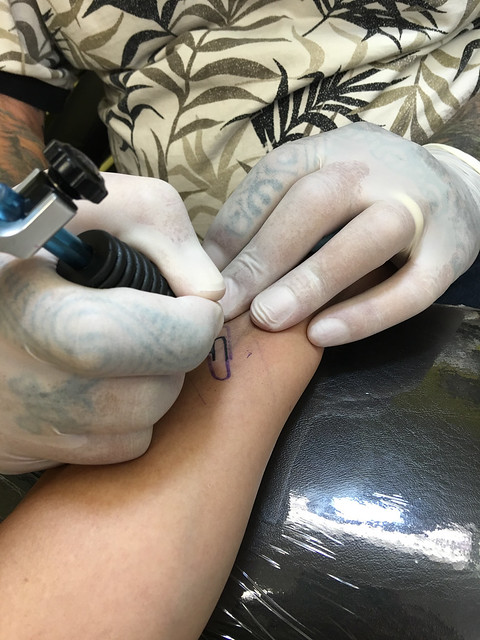 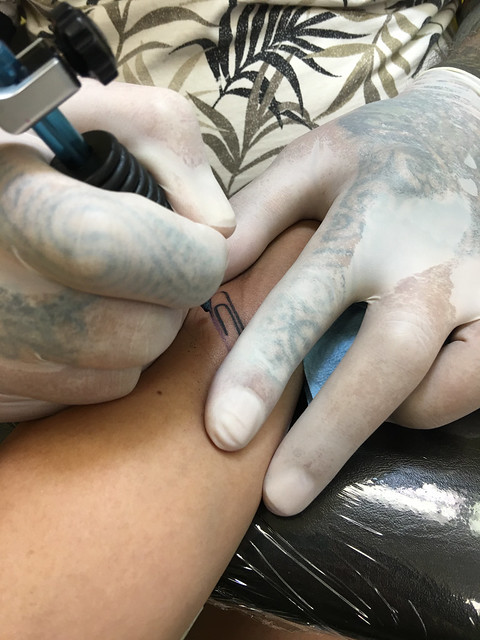 “They say wild women get tattoos,” Dave said at one point. “And if you think you’re pretty wild, the more tattoos you get the wilder you get, so you’re in for some good times.” 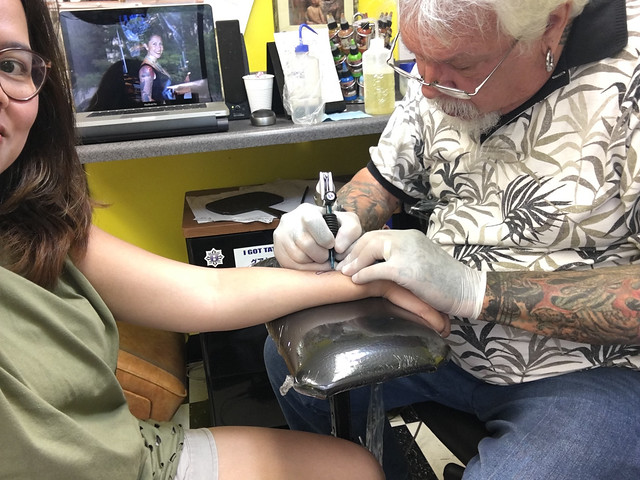 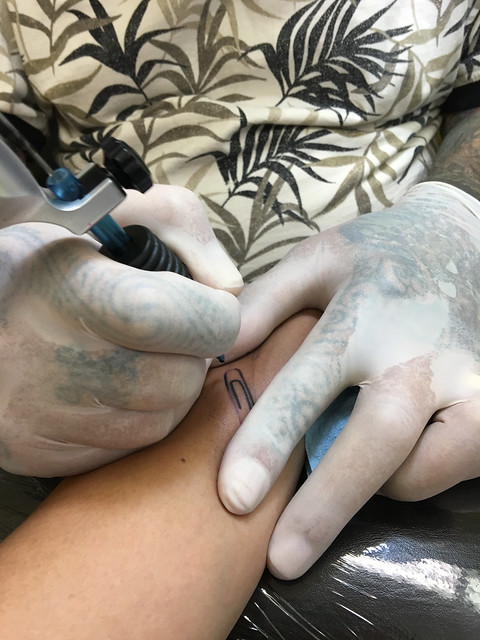 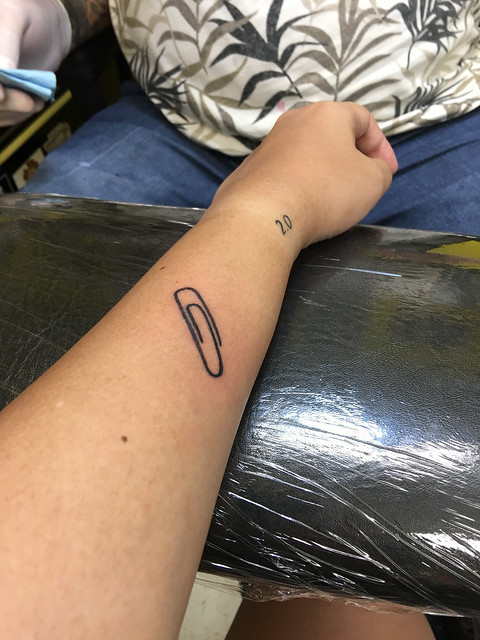 I found it funny when Dave told me that women had a higher threshold for pain than men. He said that in his 35 years as a tattoo artist, only seven women got sick or passed out while he was tattooing them. 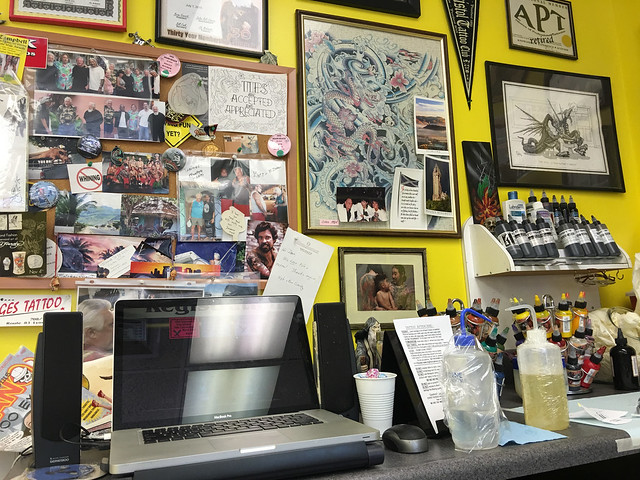 On my way out, I told Peggy that I loved their “No Whining” sign. She said that sometimes people go to the shop asking for anaesthesia. “Pussies,” she said, rolling her eyes. 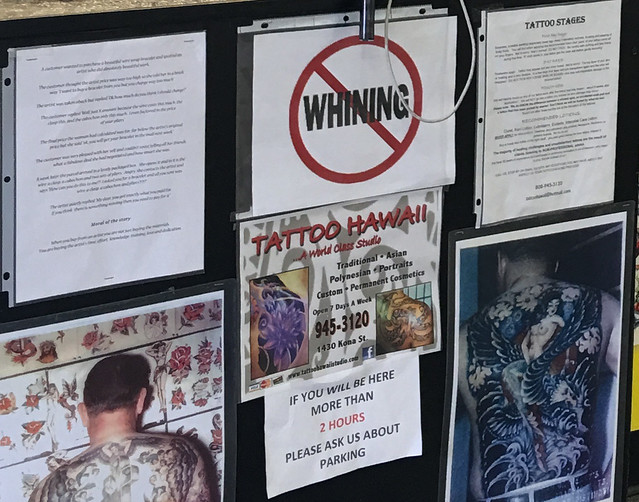 I loved how my tattoo turned out. (Tattoo Blend did too—they added it to a list of Super Cute Tattoo Ideas For Women). 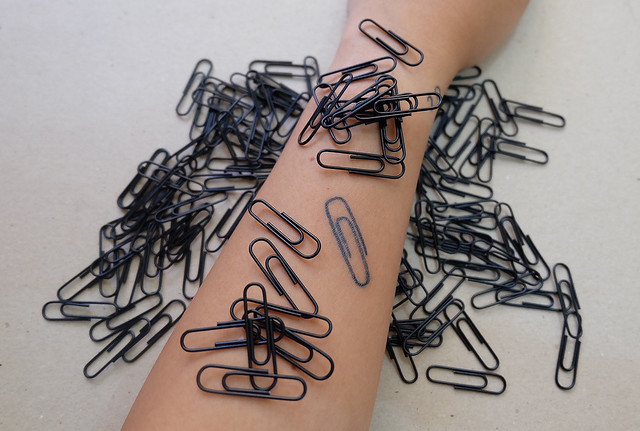 And I guess it looks super real because the next day, at the airport, as I went through security screening, the TSA guys actually stopped me to check what it was. 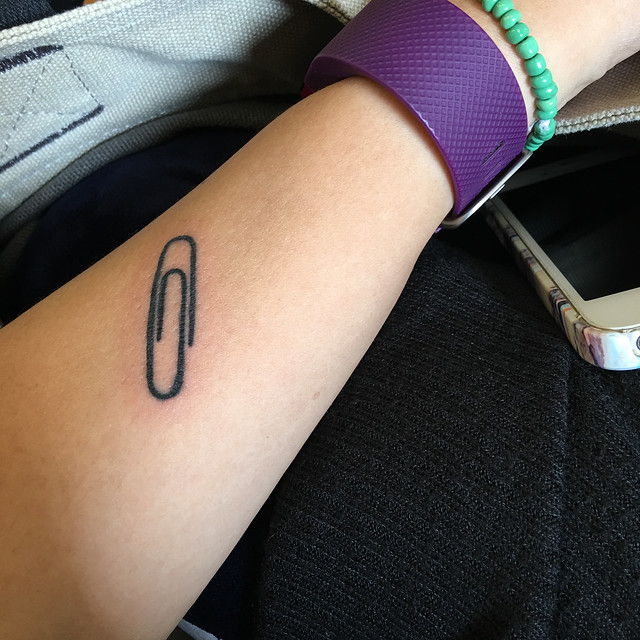 “Yes, I just got it yesterday,” I said, grabbing my bag and walking off in search of my boarding gate.

“But what does it mean?” a TSA lady yelled after me.

“Keeping it together!” I said, before waving goodbye. I had a plane to catch.