Hello, my name is Pam and I am sober.

I was seven when I first got drunk.

Someone had spiked the fruit punch at my great-grandmother’s house, I didn’t know and soon, the room was spinning and I was a mess on her couch, the giant floral patterns taunting me with their shapes before I finally fell asleep, my first alcohol-induced slumber. I had to be carried to the car.

The next time I got drunk, I was 18, a wet behind the ears lifestyle journalist who thought that when writing about a bar, the job description includes downing one bottle of Smirnoff Mule and a special drink called Boy Bastos. The name should have warned me but I was pretty stupid then, often doing things I shouldn’t, taking risks that weren’t worth it. Boy Bastos lived up to its name and fucked me up. I still managed to write the article. And I managed to stay away from alcohol for a few years.

I was 27 when I really learned how to drink. I had gone from hating the taste of beer to being able to chug down five or six bottles and still be standing. And not just standing but also becoming a little more carefree, a little bolder, making a game of grabbing people’s asses and crotches and earning the ability to actually talk to the crowd between songs when my band hit the stage. Those were days of total freedom, of occasional recklessness, of being barefoot, of calling a photographer thinking he was my driver, of puking and then crying while apologizing for puking.

I got really good at being drunk, I never blacked out, I never forgot what happened the previous night and I always knew how I got home.

And then, a few years later, I became a lightweight again. Getting tipsy after a bottle or two and saving my drinking for trips out of the country. Like in Japan, where I drank more beer than water. Or London where having a pint of strawberry beer each day became essential.

It was always just beer. And sometimes tequila. I like margaritas, I won’t say no to a tequila shot.

But wine has always been too bitter. Whiskey and scotch too fancy schmancy. Champagne was okay until that blasted yacht ride that led to me throwing up on the sand under a coconut tree. And vodka became the enemy, especially after that Snakes and Ladders Drinking Game which had me begging for mercy and left me crawling to the bathroom all night to hug the hotel toilet bowl again and again and again.

Beer remained a friend and even though we weren’t always in touch, I knew beer was always waiting for me. And on the strangest of strange nights, I tried to seek solace in my old friend but it didn’t help.

The last time I drank alcohol was on the night of our barkada Christmas party. I think I had three or four margaritas, I can’t really remember. I should have remembered but I didn’t know then that those were going to be my last drinks for a while.

On my first visit to Dr D, I forgot one important question: was I allowed to drink alcohol while being on medication?

And so I texted her.

I wasn’t surprised by her answer.

I saw her again the following week, two days before Christmas, and in the midst of our session, she reached out, squeezed my arm gently and asked, “Anak, are you going to be okay without alcohol during the holidays?”

Great. One text and my shrink thought I had a drinking problem.

I survived the holidays with no alcohol, serving it to people at the office party, yes, but not drinking it myself. At social events, I refused wine, champagne and cocktails of all sorts, simply saying, “I can’t, I’m on meds.”

But no one could go with me, not my brother, not my cousins who had to be up early the next day.

Fine, I told them, I’ll go alone. It was at Route 196 anyway, and Route used to be home away from home. And because my appetite allowed no craving for Route’s amazing garlic and cheese pizza, I knew there was only one way to survive that evening as a lone wallflower: a bottle of beer. I was going to need a bottle of beer while I watched 3/4 of the Eraserheads alone. 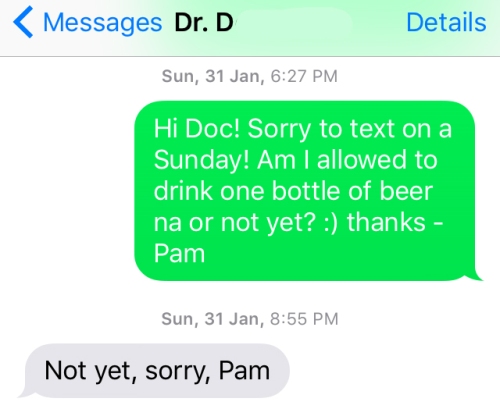 And of course, because I couldn’t have it, it made me really really want beer.

Eve and her damn apple. Me and San Mig Light. Blue Moon. Stella.

But because I am a good patient, that night at Route, I drank nothing. And the wonderful thing was I didn’t need the beer to enjoy myself.

And after Ely had finished singing, I walked up to two random guys—a gay couple who I think were on a first date—and I handed them my drink stubs. “Here, use these.”

They grinned and thanked me and I walked straight out of the bar and into the car, alcohol-free.

On my last visit, Dr. D told me that I was going to continue my medication for ten months. That probably means that I will be sober for that long.

And I am fine with that.

“We need to drink out,” a friend said.

In the meantime, there are other things to get drunk on.

Like words. So many words. And music. And running. And new adventures. And thoughts of the future.